The Sherwood Forest Railway, home of Nottinghamshire’s only narrow gauge steam railway, nestled in a valley in between Mansfield and the historic village of Edwinstowe.

A 5/8th scale, 15” gauge railway running through cuttings, over level crossings and across traditional farm land, our railway is run to the Narrow Gauge Railway principles where the little locos were used to build the foundations of roads, larger railways and water navigations of the late nineteenth and early twentieth century.

When David Colley saw two steam locos advertised for sale in 1998,he went down to Keith Hardy’s home in Cheltenham to look at them.

The Bagnall had already run at Cleethorpes Coast Railway. Pet had never been run and was finished for us. After some consideration (not a lot) we decided to buy both of them but then we had the job to find some where to run them.

For a year both locos were kept in our garage at home we pushed them out every now and then to polish them. We eventually found a site to build our railway which was within the Sherwood Forest Farm Park in 1999 and work started stripping points and sleepers behind the farm in preparation of the build.

It was in the winter of 1999/2000 that the hard work really began when we sited a storage container to act as our engine shed and started digging a track bed, laying track which went up the hill and into the sheep field to the right of where our tunnel is now. It was only 150 yards long, we were ready to open in the season of 2000. 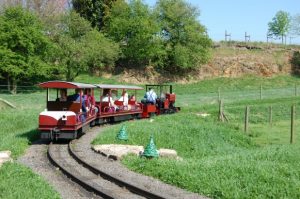 After a successful first season we decided to alter the route to go down a sight gradient, through a cutting and across the lane at a level crossing. This was started in 2001 and the final goal was to arrive at the Buffalo in the far corner of the farm park. Each year we have extended the line as time, man power and resources have allowed, until finally in 2006 we reached our second station area, just in time for two visiting loco’s from Cleethorpes which joined in our Gala celebrations. Over the winter of 2007/2008, the lower station was revised in order to simplify the running procedures. The line now has two level crossings, a tunnel and two stations named Loxley and Welldale. The farm park sadly closed at the end of the 2010 season, but this has bought a new life to the railwy as a tourist attraction in it’s own right…

The tunnel which we go through was rope containers from the former Clipstone Pit, and was sited in 2004.

The route we now take is part of the flood dykes, an irrigation system built between 1819 and 1838 by the Duke of Portland who spent almost £40,000 on a 7.5 mile irrigation scheme to create water meadows on the dry and sandy land. Huge amounts of earth were moved to smooth the fields and move the river, with an irrigation canal being excavated along the top between Mansfield Woodhouse and where we are now.  This was partially drained in the fifties to allow development but provides us with a stunning valley to run around and a level course to continue along for future extensions.