Our 5 inch Gauge Miniature Railway has a total of ¾ mile of track with around 2/3 mile of running track. It includes a Tunnel, Motive Power Depot, Carriage Sheds, Turntable and Automatic Signalling System

In February 1999 Mike Bass and a team of volunteers moved onto the site at what was then the Avon Valley Country Park (now Avon Valley Adventure & Wildlife Park). Their aim was to construct a “double track” main line 5″ gauge, ground level railway. In May 1999 a five year plan was drawn up and was completed by October 1999, with men working 12-14 hours a day. Most of the results of this plan can be seen within the photo gallery on this website – I hope you enjoy navigating around the site. 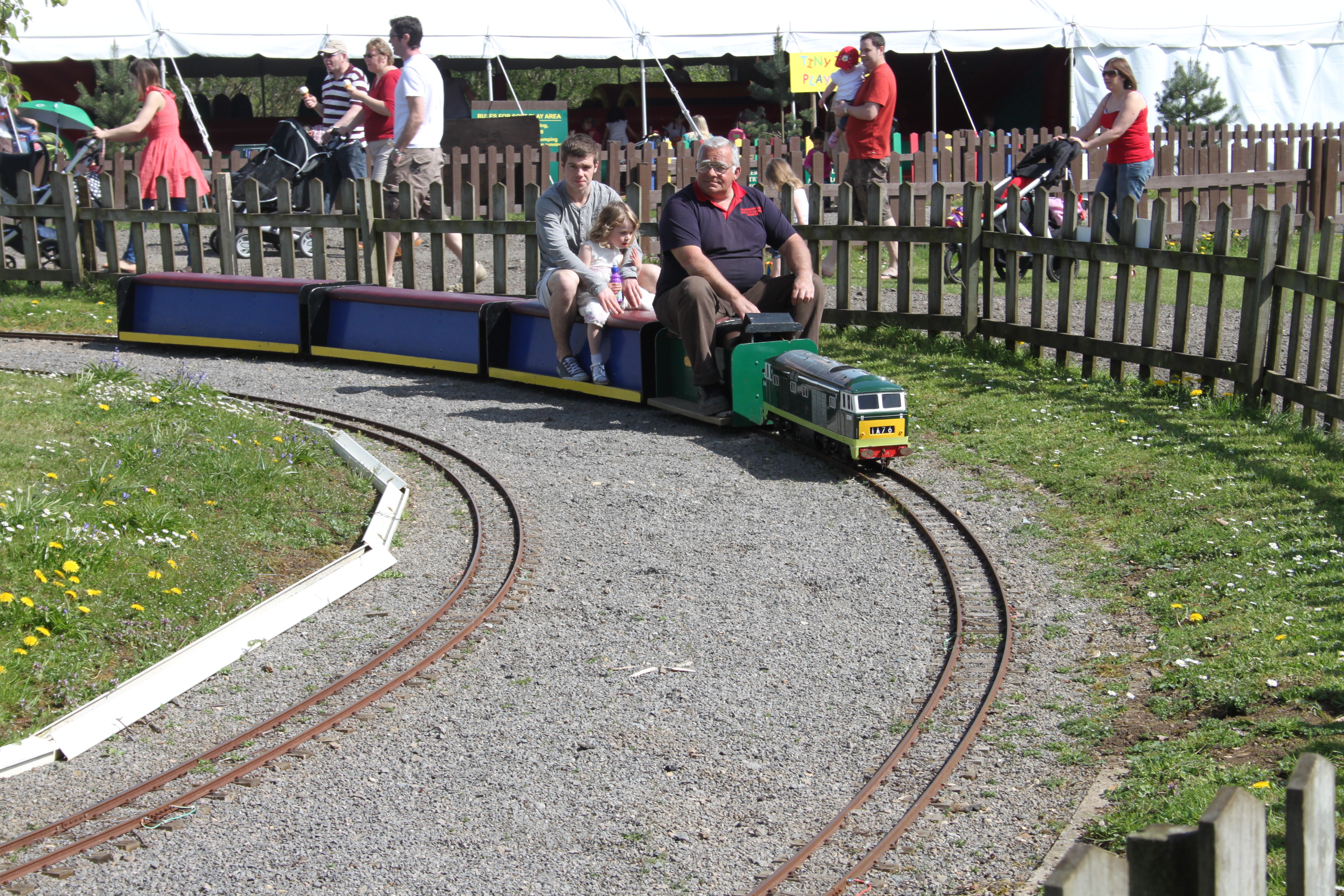 Initially, train rides were given on a short length of portable track (150ft/50mtrs) laid on the greenfield site, using a Warship Class (42) Locomotive “D824 Highflyer” and two Aristocraft carriages.

By late June 1999 the new track bed had been excavated, and nearly 600 tons of limestone tipped and consolidated to form the base. Prefabricated track panels (normally 10ft lengths), which were made on site, were soon laid and by August 1999 the outer circuit, some 900 ft in length, was opened for public running.

A Portacabin, which was the former Wages Office at Old Oak Common, was brought to the site and formed the basis of the station building. A new tiled roof was built over the cabin and station area. A derelict turntable was purchased, restored and modified then installed with direct access via a ramp to the locomotive shed. This certainly made the job of stabling locomotives and rolling stock much easier than had previously been the case. The previous method to stable these items was to nearly dismantle them completely each night after the park had closed. Which took a considerable amount of time and was very heavy, fiddly work!

Track laying and fencing took the remainder of the year, until eventually the double track “inner circuit” was completed within a secure site.

A period of consolidation followed until 2002 when work commenced on building a 60 ft tunnel. This feature has certainly proved popular with our passengers of all ages and was finally completed in 2003. A Commemorative Brick can be found mounted on the front portal.

The signal box is largely based on that which was located at Parsons Tunnel, near Dawlish in Devon. It houses a 36 lever replica frame and was initially going to be used to control the signalling on the network. This proved to be very time and labour intensive and all signalling is now multiple aspect colour light, being activated by a combination of approach controlled track circuits.

The locomotive fleet continues to expand. At present there are no operational steam locomotives owned but the railway but there are a few owned by the volunteers that help run the railway. The Diesel fleet comprises of 10 operational locomotives, that are all battery operated. These are mostly Abbots model engineering class 66’s and 67’s.

In 2018, due to ill health Mike decided that is was time to hand the reins over to Avon Valley Adventure & Wildlife Park and retire. The future of the railway looks safe and secure with future plans of maybe converting to a dual  5” & 7 ¼” Gauge railway.

Access to the railway can only be gained through a day ticket to Avon Valley Park.