The North East’s Only Portable Miniature Railway! – 𝒂𝒗𝒂𝒊𝒍𝒂𝒃𝒍𝒆 for events and hire 🇬🇧

Our 200ft portable railway is a dynamic and unique attraction for any event- from festivals to weddings! Being the only portable railway in the North East, we can offer an unapparelled attraction which can conjure feelings of nostalgia, especially due to our vintage style trains. We are based in Tyne and Wear, however we can travel across the country to deliver high quality events! Find out more on our website: GLMRailways.com 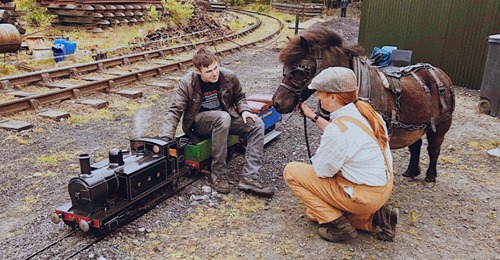 Assembled, operated, and removed in the same day, our railway is perfect for large outdoor events such as Steam Fairs and Rallies. We are an environmentally conscious railway, using sustainable materials such as recycled plastic in the construction of our track.

Our main locomotive, Scamp no3, is a minimal style petrol-electric. It cleverly breaks down into smaller sub-assemblies for easy transportation. We hope to use this for recurring events throughout the North East (see photo below). Our steam locomotive, ‘534’, is used for special occasions and larger events! 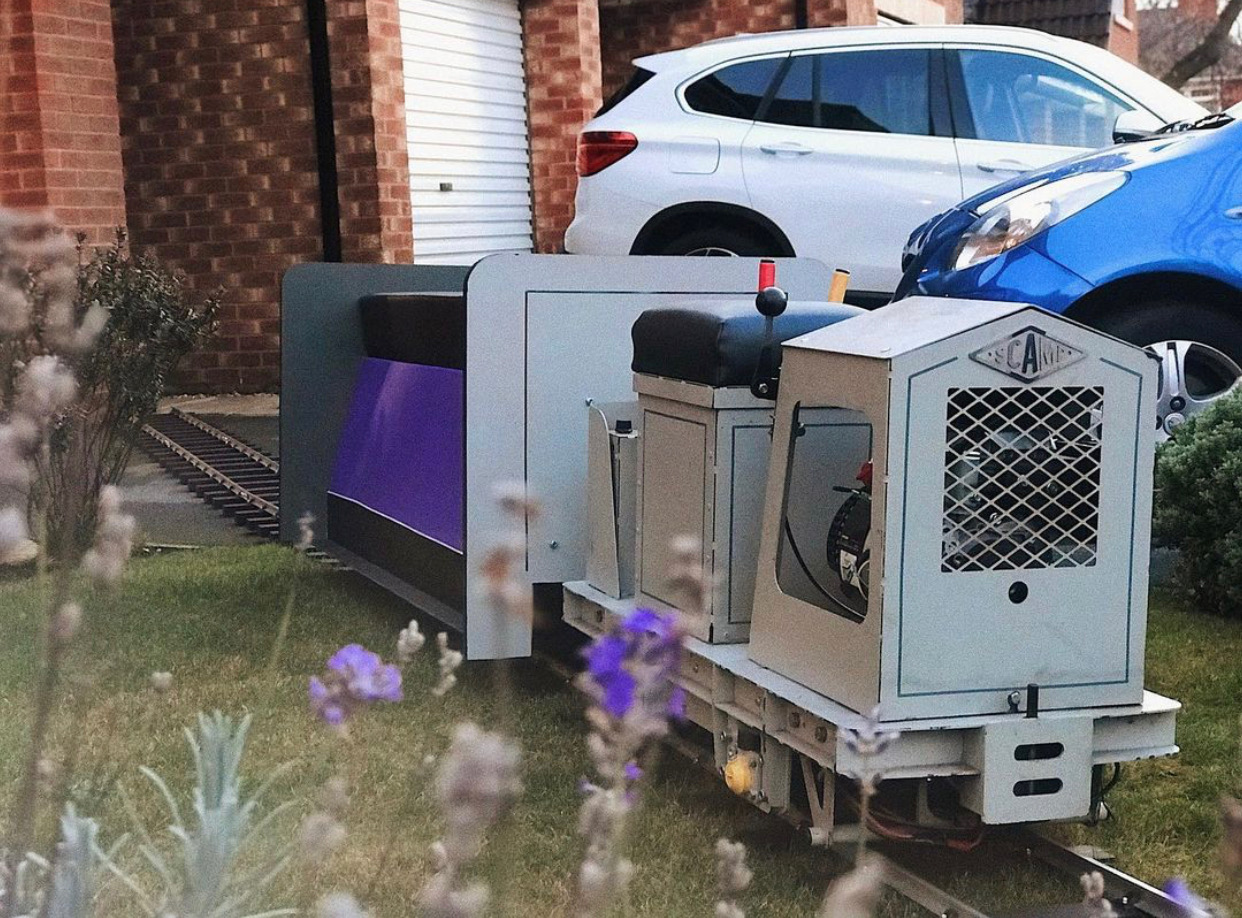 To find out more, please visit our website: GLMRailways.com

Originally established in 1973, Ingfield Light Railway is a private 10 1/4 inch gauge railway situated in the grounds of Ingfield Manor School  near Billingshurst, West Sussex. It consists of approx 3/4 mikle of running line in and end to end “Y” layout with both single and double track sections. 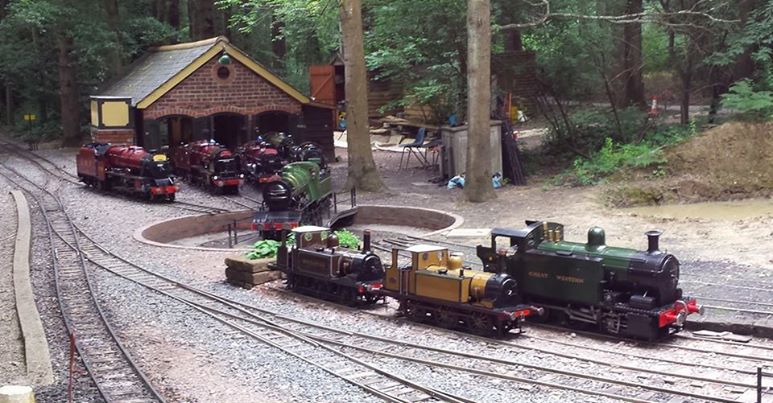 The school is for children aged 3-19 with neurological motor impairment and the railway not only helps to raise funds is also so a source of great enjoyment for the children and their families.

We operate at various school events held throughout the year including the famous “Fete Day” when an intense service is operated,

At other times the line is available, by appointment, for group and society visits. 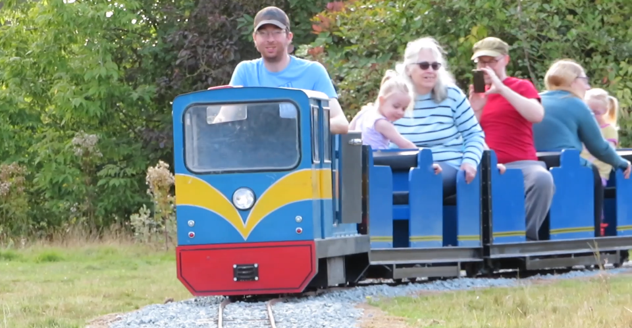 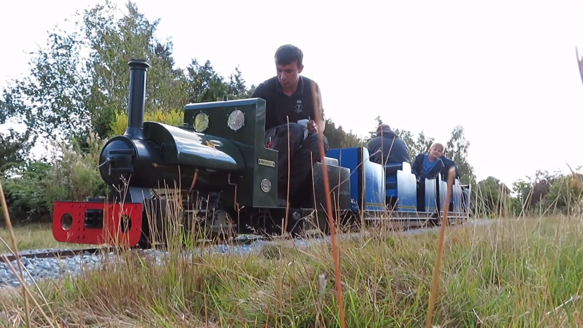 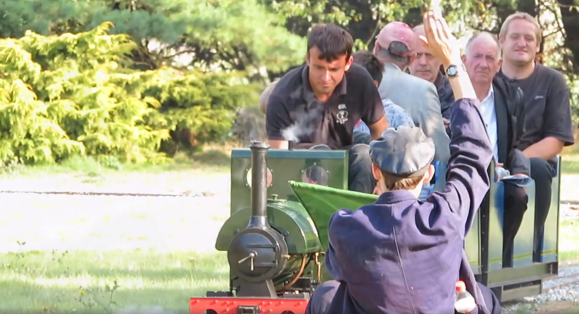 The Route of the Railway is a single 1/4 mile loop around the garden area with a terminus station. The line is steeply graded and the locomotives have to work hard to get their trains round the track. The line also has a return triangle which enables trains to make several loops of the track before returning to the station.

There is already plans to extend the line to incorporate a double track mainline section with a dual gauge 7 1/4″ and 5″ line running east towards the M11 from the current loop layout. When complete this will give us a total running length of just over 1/2 mile!

The railway is always after more volunteers to help build and operate the railway. If you are interested in being part of this brand new miniature railway then please get in touch! 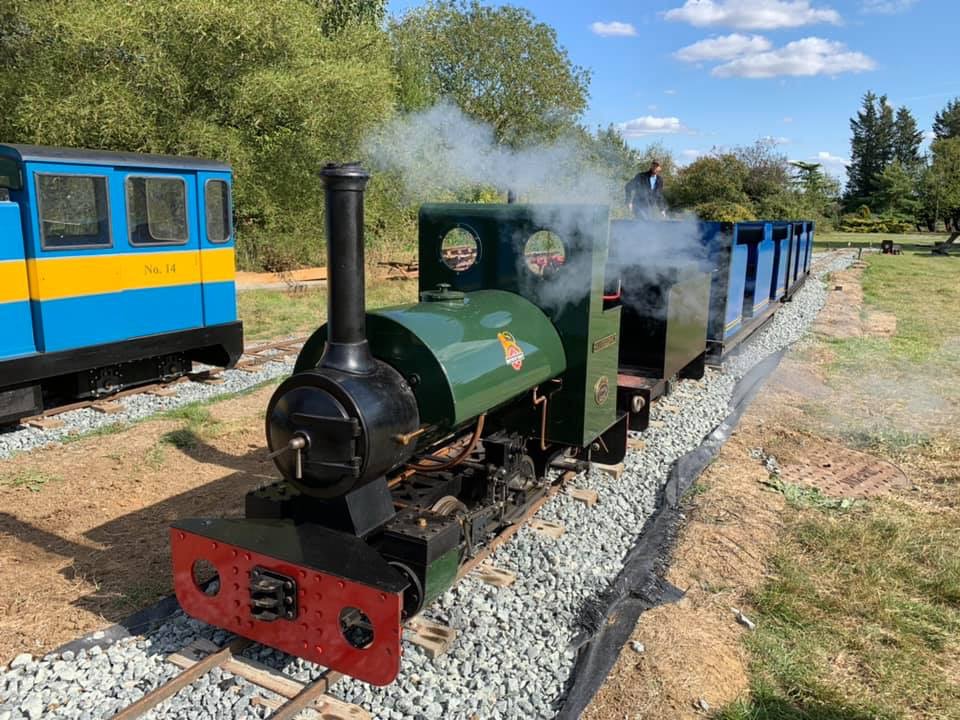 Lappa Valley is the only attraction in Cornwall that transports families on an exciting nostalgic steam train ride into a secret world of traditional fun and family adventures. 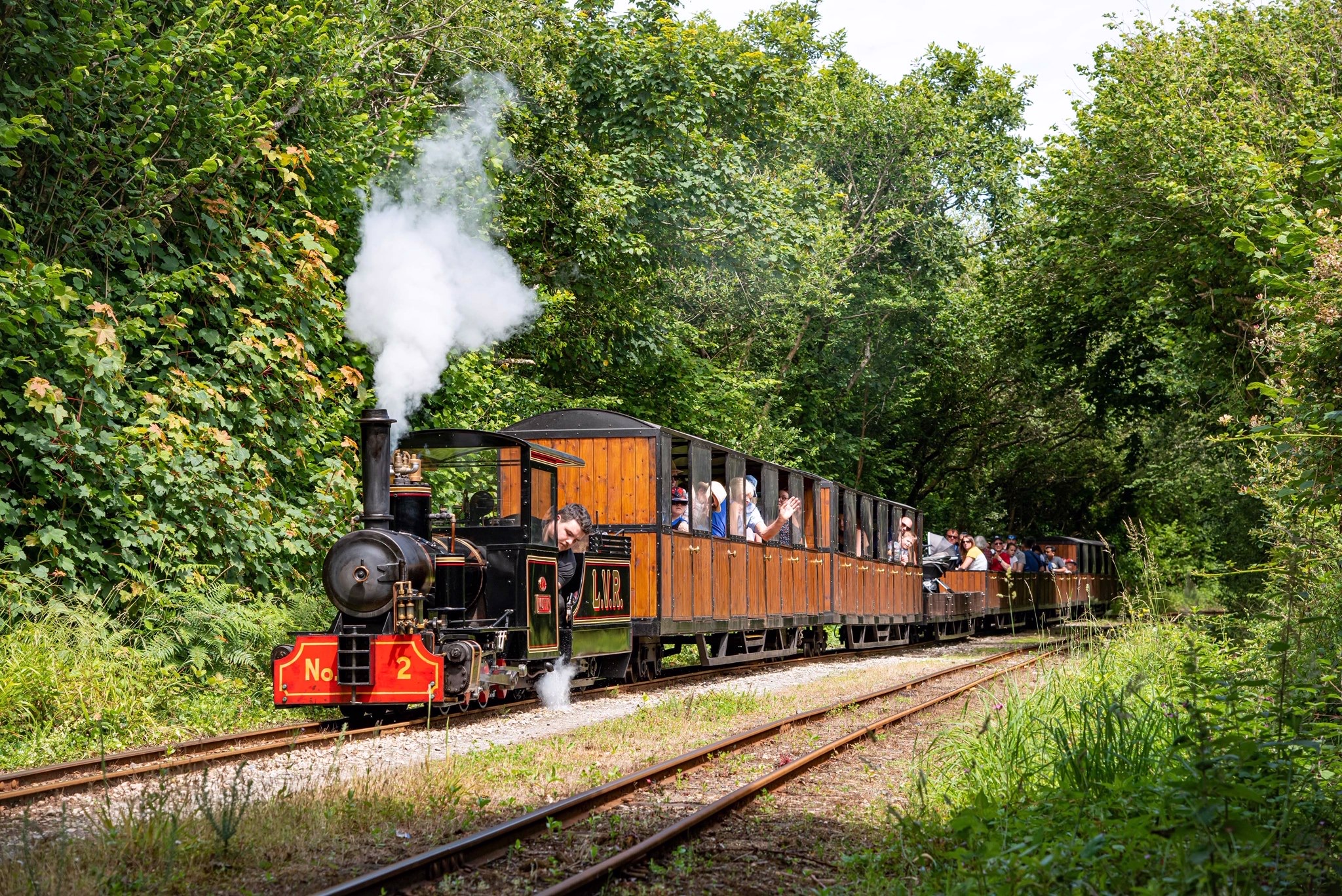 Located in the countryside just outside Newquay, we’re one of the best days out in Cornwall for families. Children will delight in the thrill of trains and boats, explore nature, let off steam in our adventure play areas before refuelling in comfort at the fantastic café. 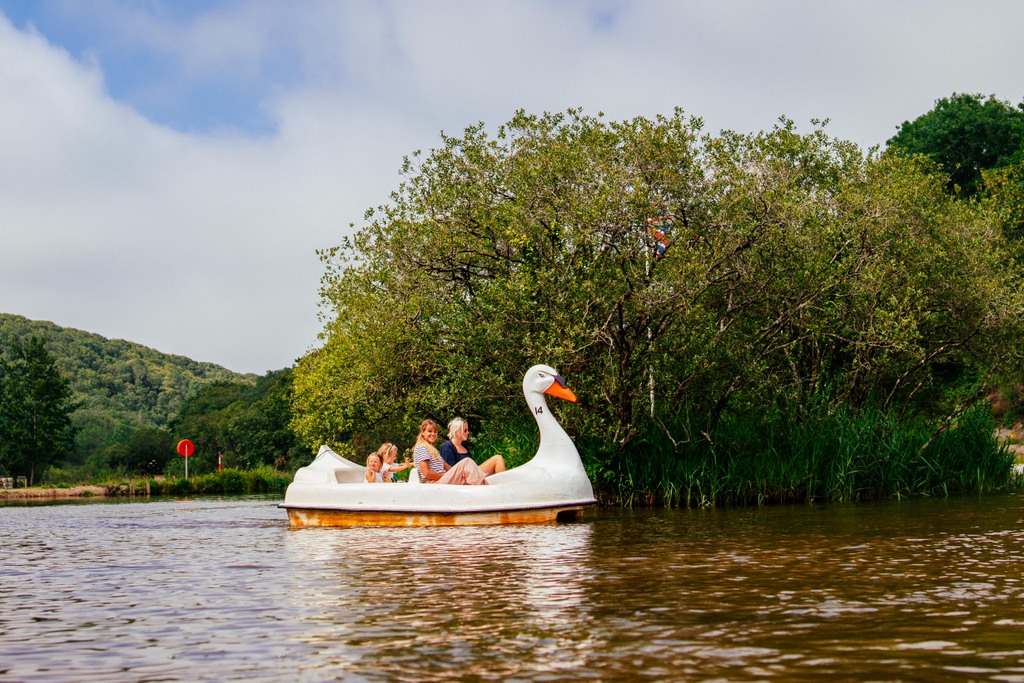 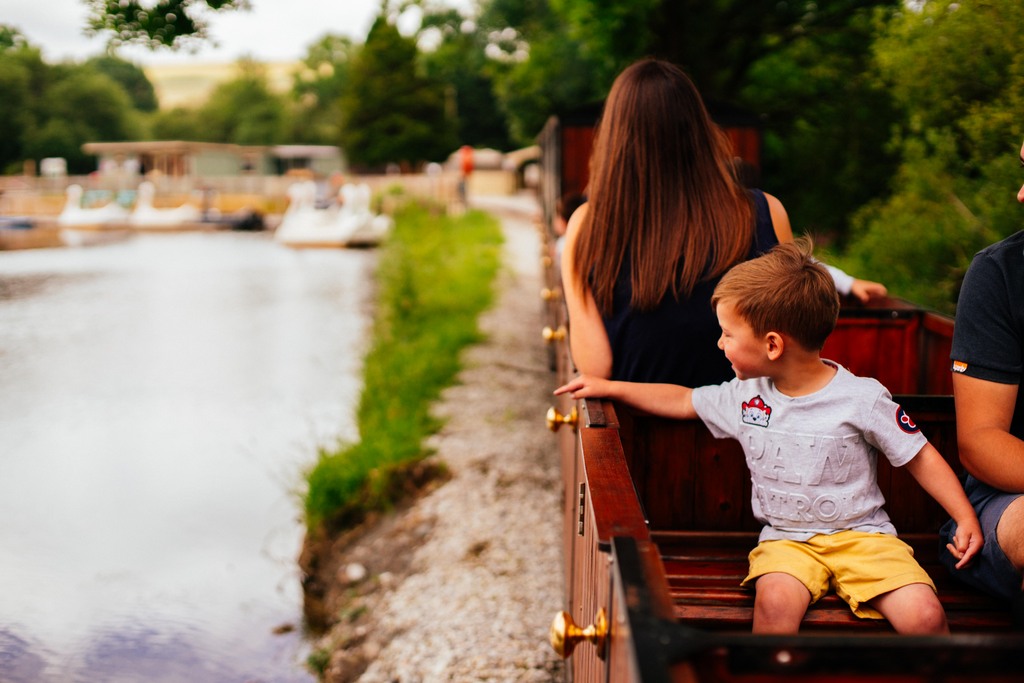 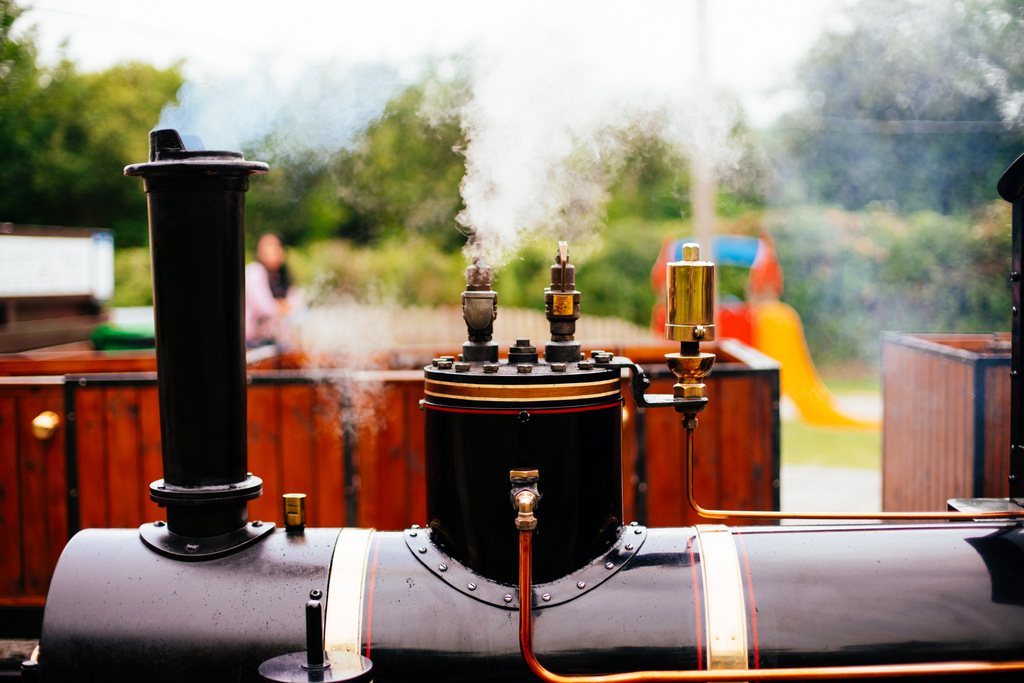 We will be open daily from 28 March 2020. We operate a seasonal timetable throughout the year, and our timetable will vary accordingly. Please check our website for the most up to date details. 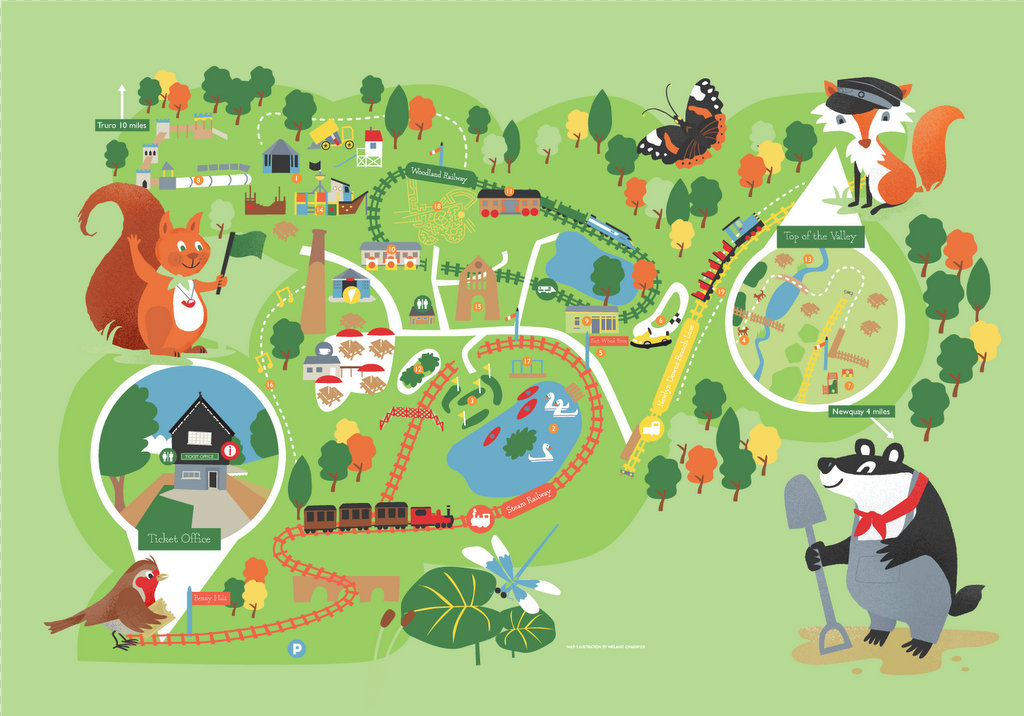 We also offer concessionary rates for NHS staff, members of HM Armed Forces and foster families with a MAX card – please ask at the ticket office.

The Ticket Office will open at 10am and will close as the last visitor leaves the park, usually around 4pm.

Please allow at least 15 minutes before your preferred train departure to park your car and purchase your tickets.

Brickworks Miniature Railway is a 7.25″ miniature railway operating on most of the Brickworks Museum monthly Sunday Open Days between March and November as well at other times which can be checked on the Museum’s website. 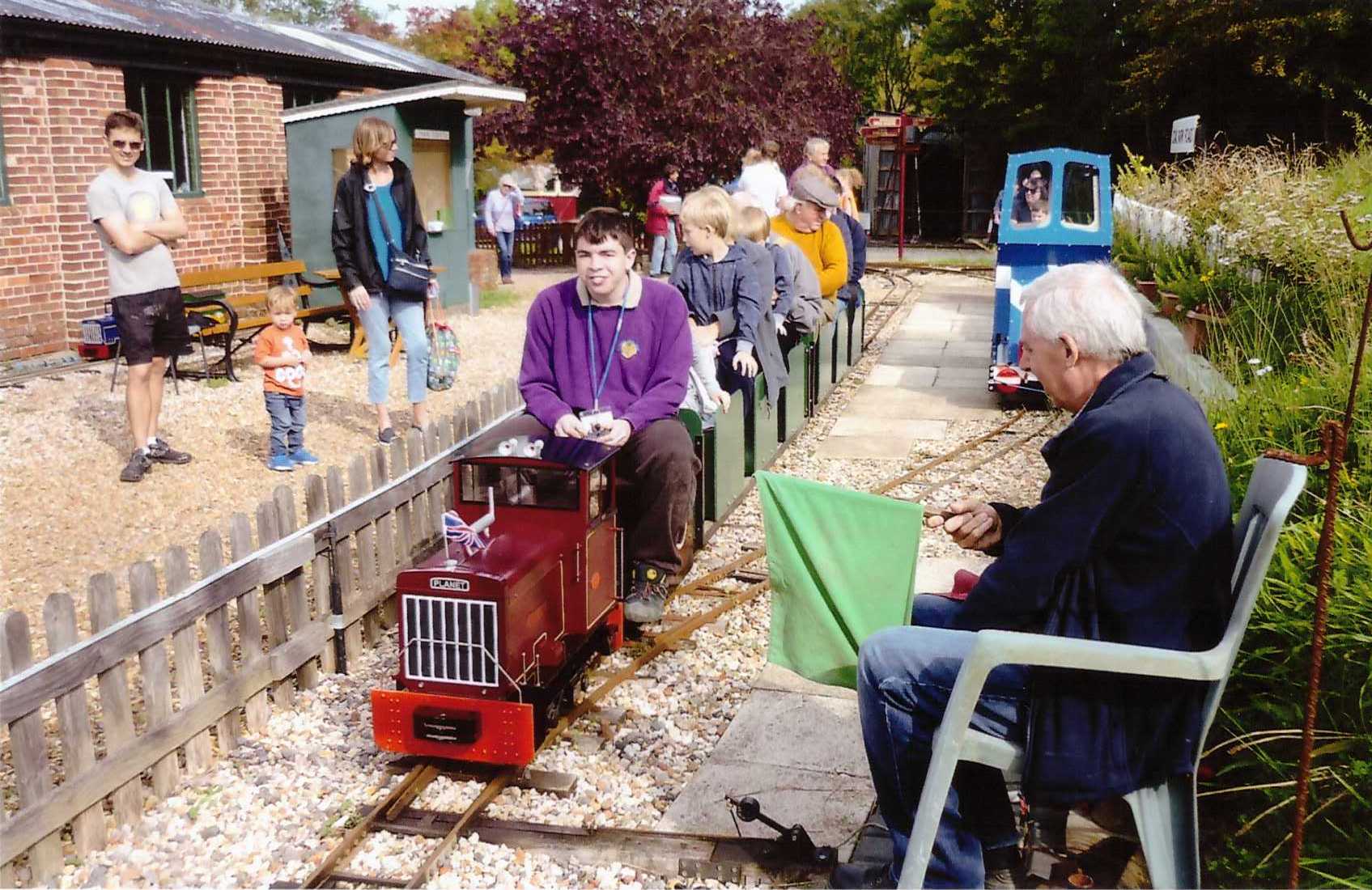 Riverside Miniature Railway (RMR) is a community railway project built for the people of and visitors to, the Cambridgeshire market town of St Neots. The RMR opened in 2017 and has a dual gauge, 5″ and 7 1/4 ” track which is currently approximately 350m in length, although this will be doubled in size once we complete our extension.

The track runs through attractive parkland in the heart of our town. Rides are offered to passengers of any age behind either resident club locomotives or visiting engines. 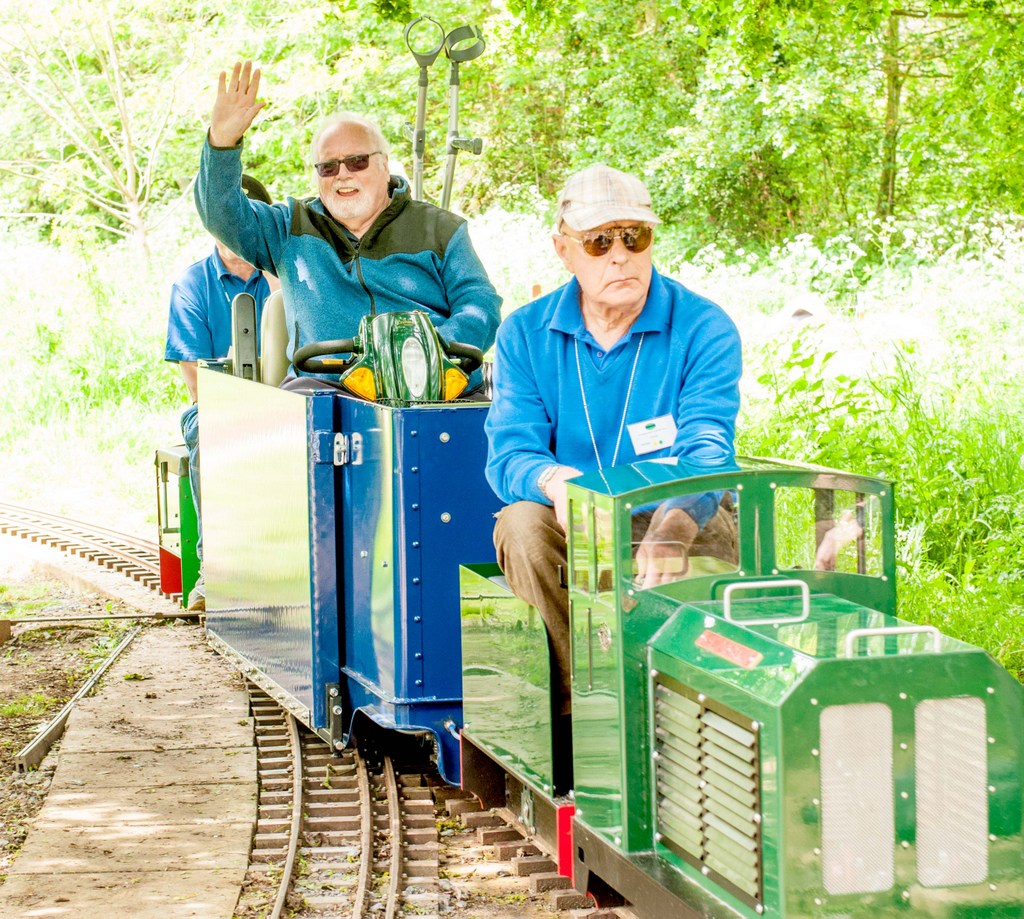 We are also able to offer rides to passengers in wheelchairs & mobility scooters in our comfortable wheelchair carriage.

The railway offers rides on Sunday between Easter and October and some additional dates as well. Please see our website for more details

We are located within the Riverside Park in St. Neots PE19 7HD

Hastings Miniature Railway took over the railway in November 2015 and after a winter of restoration, it was reopened on 13th February 2016.
A 7 1/4 gauge miniature railway which is situated in Alexandra Park, Hastings. It is approximately 250yds in length, the line goes around two loops, through a tunnel and over bridges, surrounded by the woodland area of the park. 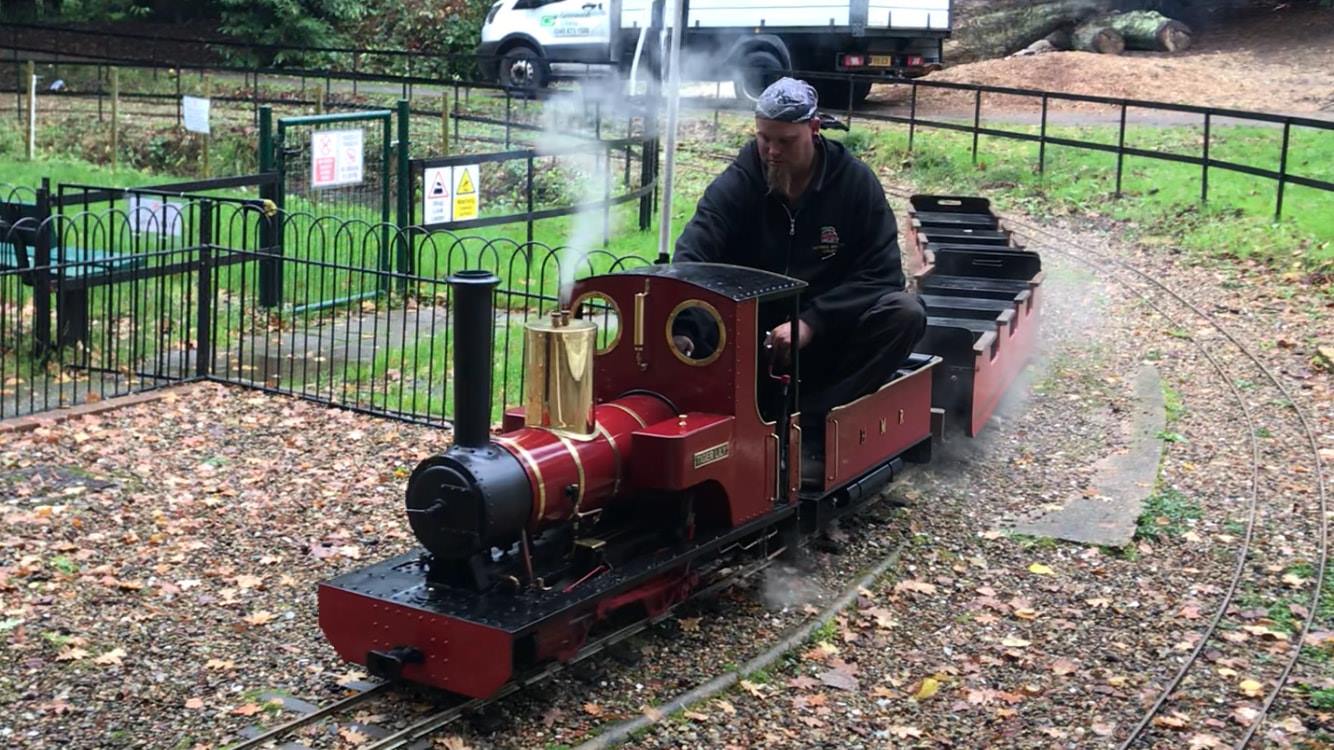 Throughout the year the railway holds many events including Easter, Halloween and Christmas fun, Picnic and Play during the Summer and fundraisers to help local community groups. 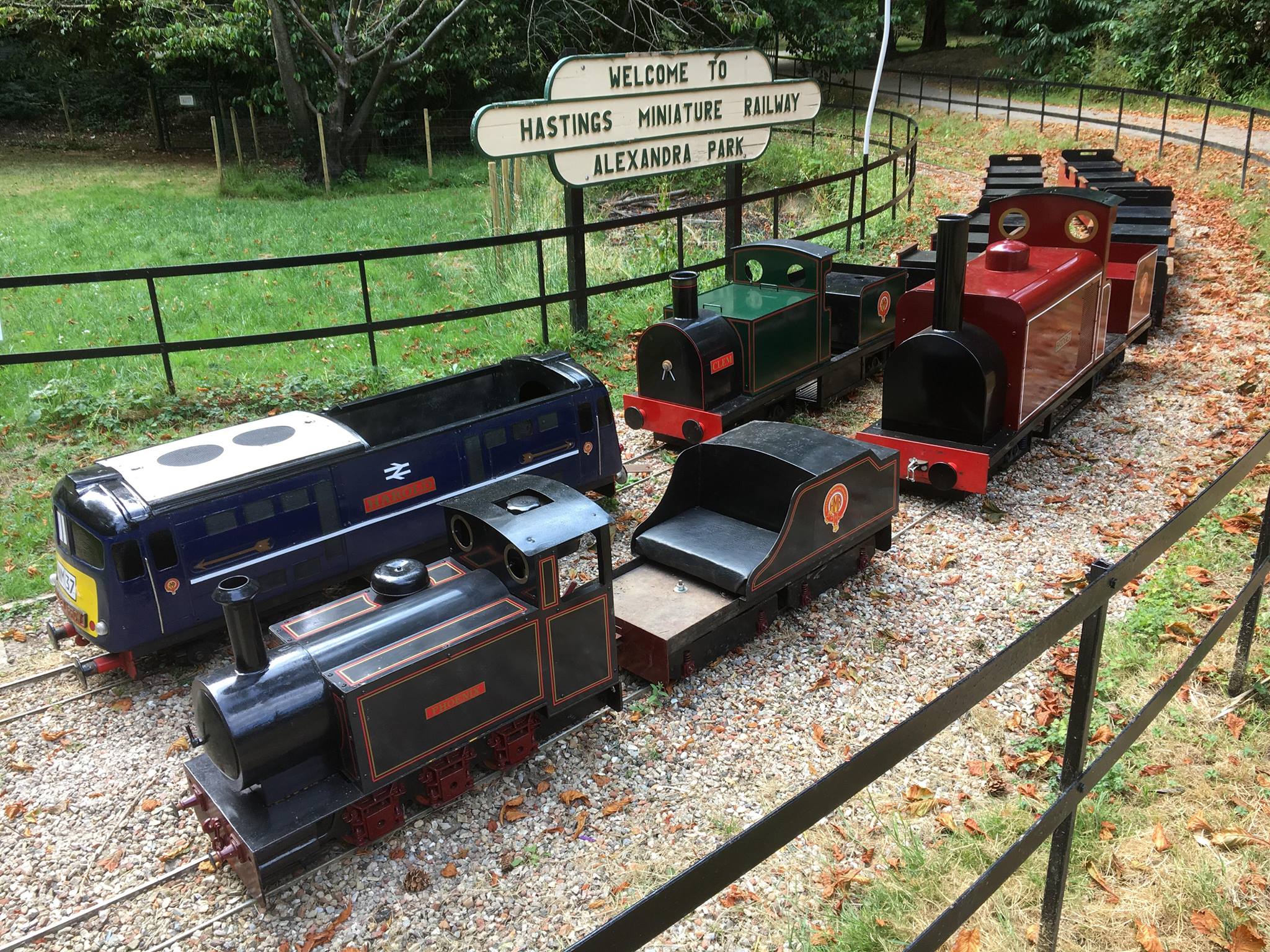 Open every weekend throughout the year (weather permitting), and during school holidays, HMR Alexandra Park enjoys being an attraction for local families as well as those visiting the town.

The Watford Miniature Railway is based in Watford’s Cassiobury Park, regularly voted one of the UK’s top public parks.

First opened in 1959, we run trains all year round through a small section of the park. 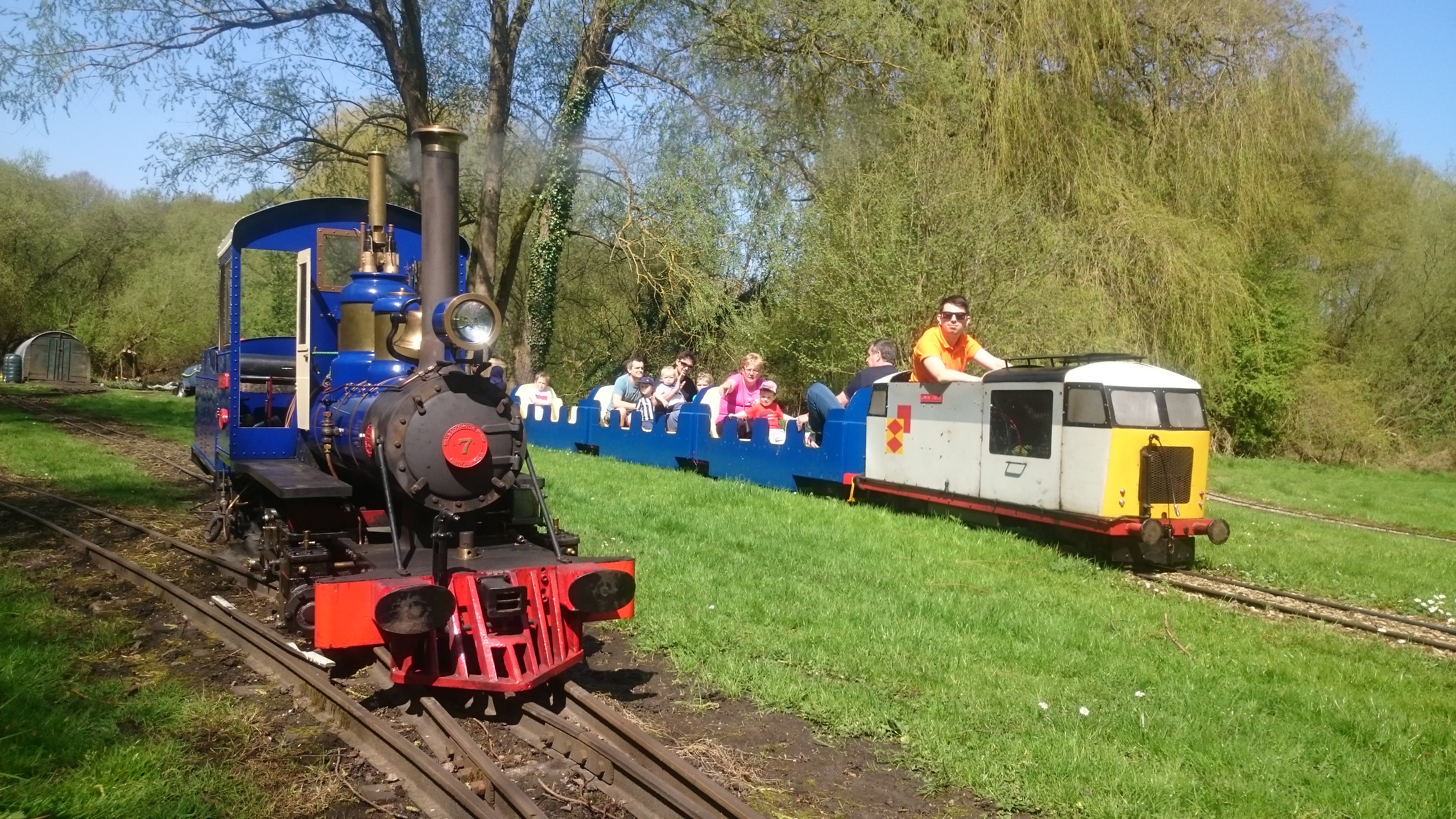 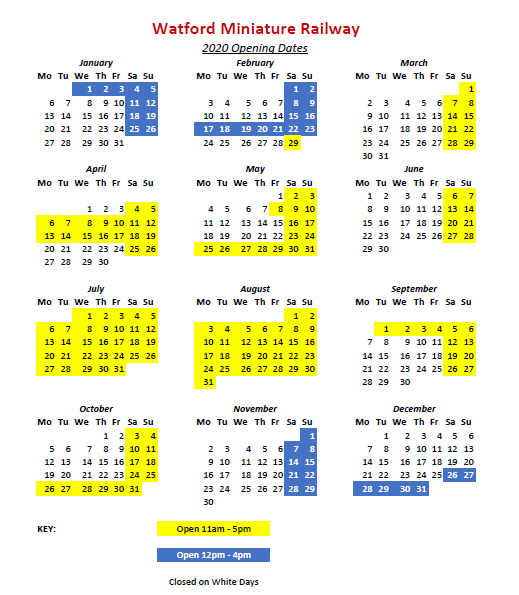 £2 per ride, Adult or Child

Discounted rates are available for pre-booked groups of 15+

The SDMR was formed towards the end of 1992 and saw its first public trains run in the Spring of ’93; at this stage the line was only a few hundred yards long and entailed an end-to-end operation with propelling in one direction from the station beside the shed.

However, the site at Buckfastleigh has boasted miniature railways of different gauges in the past before its current existence, starting back in the late 1970s when the Manning Wardle locomotive Yeo ran around a 7 1/4 gauge line. Evidence of this previous history can be seen at one of the foot crossings near the Rose Garden, where there is another rail embedded in the crossing laid to 10¼ gauge.

A journey today lasts between 8-10 minutes and takes passengers on a ½ mile trip around the award-winning grounds of Buckfastleigh station on the South Devon Railway. 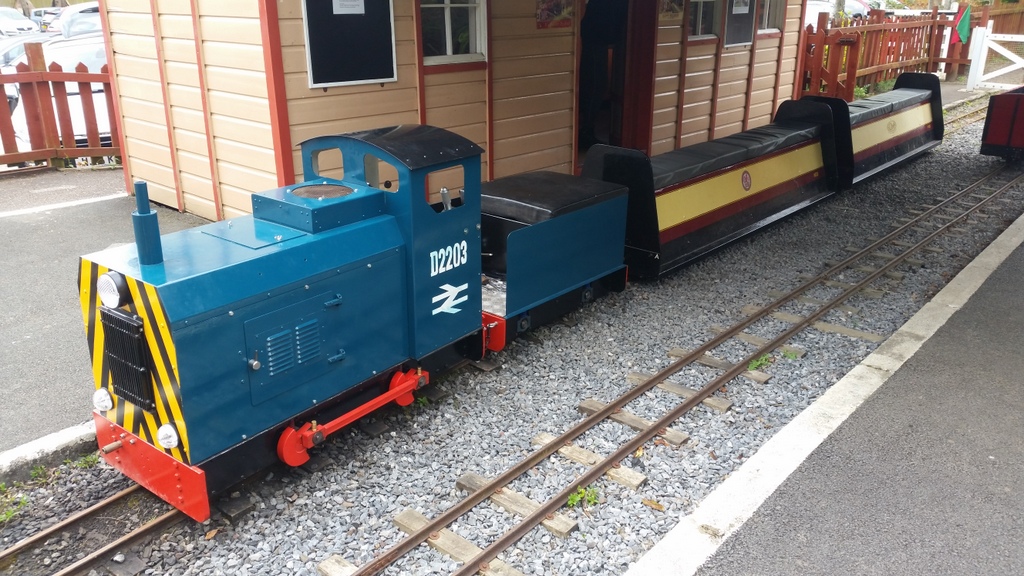 Departing from Buckfastleigh Junction station we pass through the Patio Garden where friends & family wave good-bye, then traversing the level crossing and running parallel to the River Dart for a short distance before entering Riverside Tunnel; on certain days we are joined by the Riverside Shuttle running alongside us as far as Otter Halt. Beyond the tunnel, crews have to work their engines hard to climb the steep gradient to Dartbridge, one of the highest parts of the line, thrown into this is a fearsome S-bend which really tests both engines and their crews.

As we reach the half-way point, to the left is the SDR’s new carriage shed built in 2017, this is lost to view as we now turn south again to head back to the Junction. It is at this point we reach the newest part of the line, Dartbridge Loop, which was completed during the winter of 2016-17, and enables the SDMR to run two trains in opposite directions simultaneously and allows us to run more trains at busy times. Should we pass another train here, keep an eye out for the crews exchanging tokens to allow them to proceed onto the next section of the line. With the loop behind us, another climb ensues to allow the line to cross over the top of Riverside Tunnel; if timed right when to two trains are running you will see the second train disappear into the tunnel as we cross over it. 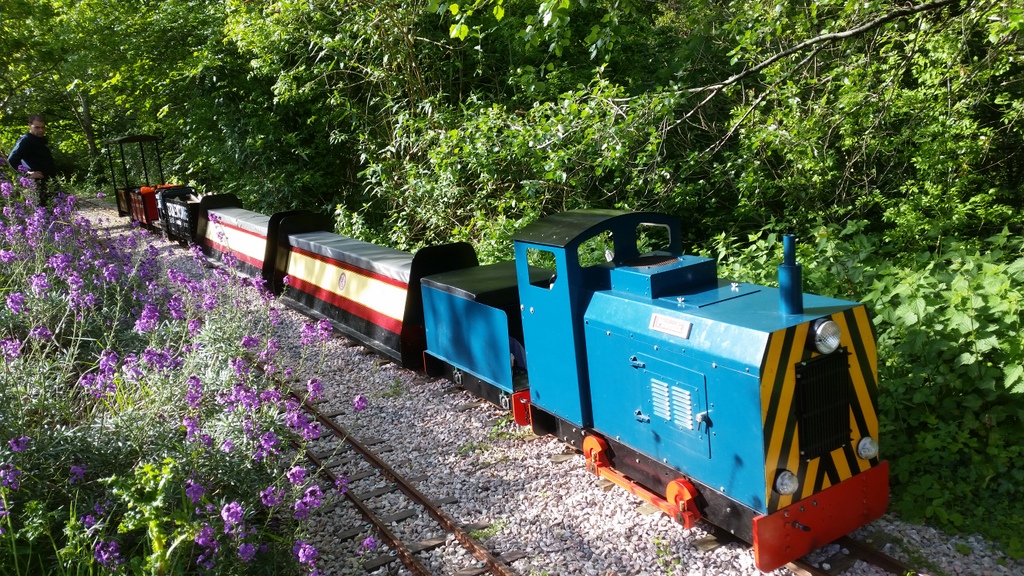 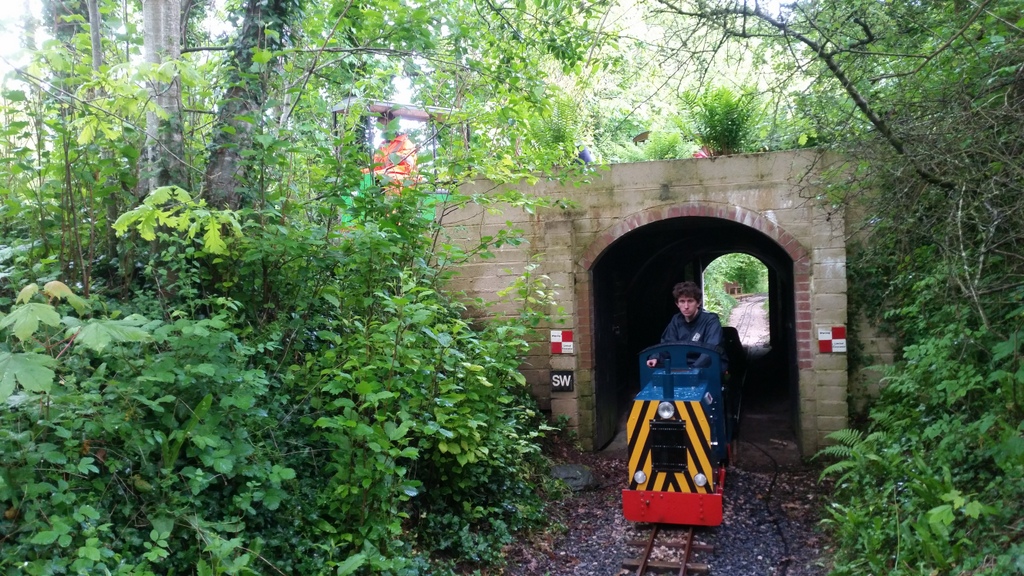 Here we can see No 3 Pheonix running in the opposite direction through the tunnel. If you look closely you can make out the Tram, just about to go over the top of the tunnel ©Kelvin Stapleton

The train now has a brief view of the shed yard across the car park as we head towards the level crossing, with the all-clear from the crossing keeper it is time to descend back into the gardens one of our steepest gradients, passing the junction to the Shed Branch and entering Garden Cutting and finally rounding the curve back into Buckfastleigh Junction Station and journey’s end. 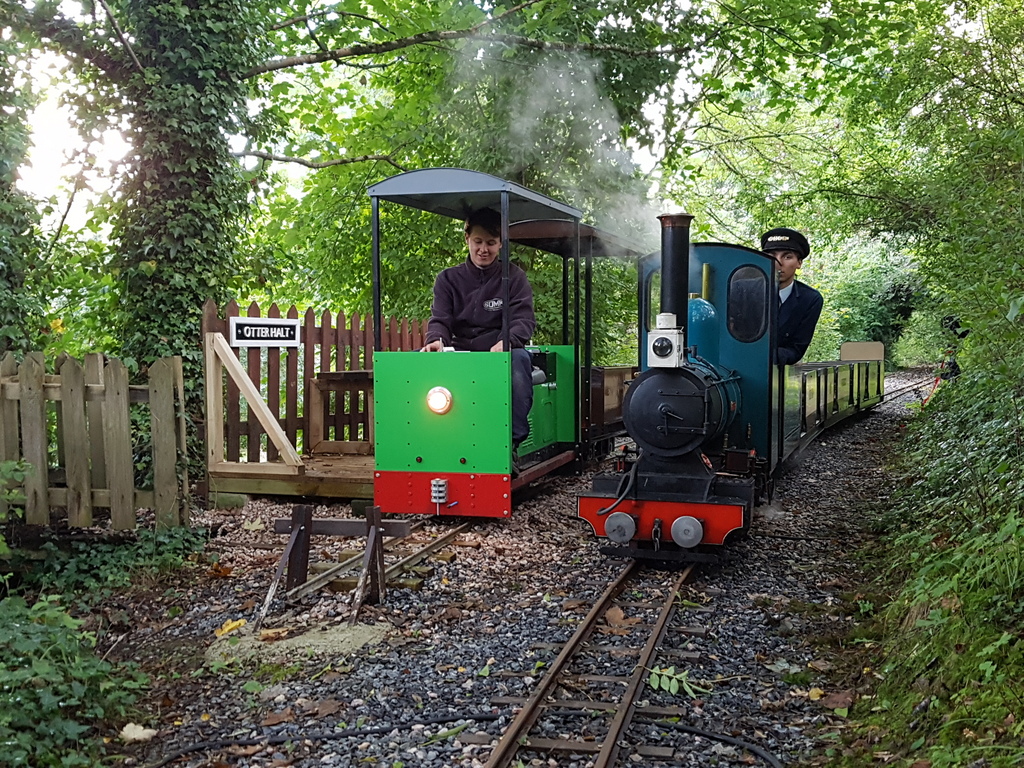 This is a staged photograph from when we re-opened Otter Halt. On certain special events we have visiting guest locos. Here we can see the Tram and Otter posing for the camera ©Kelvin Stapleton

Traction on the line has always been varied, ranging from steam to diesel/petrol by means of electric and even pedal-power! At present the two operational locos are both petrol powered, No.3 ‘Phoenix’, the stalwart of the fleet, and a tram engine built by one of our members. Waiting to return to traffic are resident Hunslet No.8 ‘Idrys’ & petrol powered No.2, alongside two new build locos, a Class 25 & a T2 steam loco. 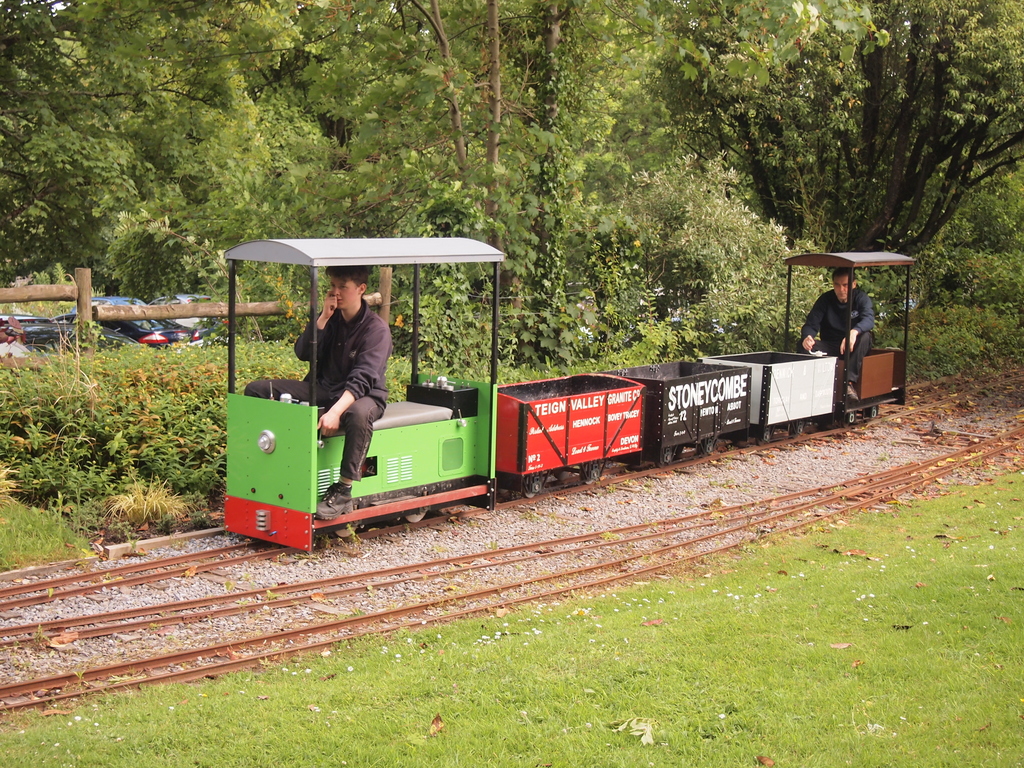 The Tram can be seen here on the Riverside Branch just outside Buckfastleigh Junction Station, on a demonstration freight. As well as coaching stock we have a fair collection of goods stock some of which is pictured here. ©Tim Symons 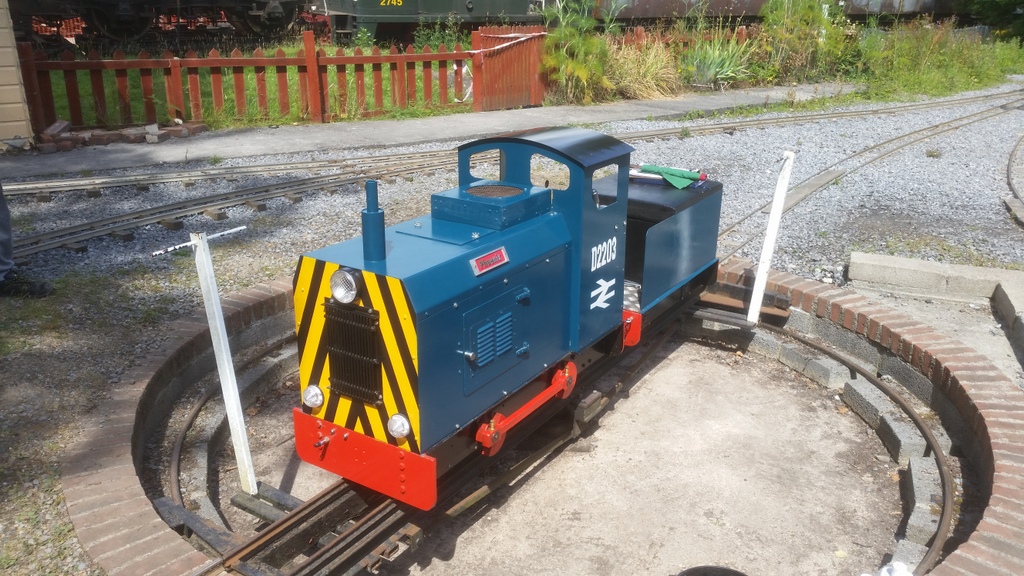 And Finally No. 3 Pheonix standing on the turntable before the days services after a polish and a clean. ©Kelvin Stapleton